College Baseball and the Journey Through My Brain 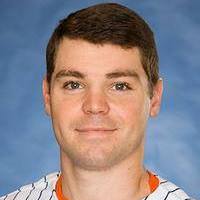 I am a retired NCAA D1 pitcher and my brain was the toughest hitter I ever faced. When playing competitive baseball as a teenager in a sport that promises failure, my teenage brain struggled to handle the pressure. I was recently diagnosed with ADHD and depression with elevated levels of generalized anxiety. I had a great personal pitching coach and mentor, but that wasn’t enough to overcome myself.

At the age of 15, something started happening that never had before. I was terrified of stepping on that lonely pitcher’s mound. I was great in the bullpen, not scared of a thing. As soon as I toed the rubber in the game, my heart began racing and I felt that my self-worth resided in each pitch. One ball would lead to the next, throwing a strike or getting an out felt like the weight of the world fell off my shoulders momentarily- only to return when the next hitter stepped in the box. I clenched the ball so tightly that my velocity decreased by 10 mph at times. I did my best to fight through it, but only succeeded from time to time.

I felt a depreciation in my self-worth as a human being, all because of a game. This impacted my entire life. I became less extroverted, content, and confident in abilities outside of baseball. I bit my nails habitually and grew anxious in performance and social situations. Luckily, I had enough talent to keep receiving new opportunities. To put things in perspective, it was a good day if I recorded three outs in the first inning. I worked on mechanics daily and felt I did everything I could to put myself in the position to succeed. Nothing I did changed how my brain “switched mindsets” once in the game. I was fortunate enough to throw well enough to walk-on to a D1 program thanks to my talent (even though I still did not perform to potential in the tryout). During the fall season intrasquads, I threw “lights out.” I proved myself enough to earn a top spot in the bullpen.

When Spring rolled around, I was a completely different pitcher. I struggled in the first couple of intrasquads, but bounced back in the remaining intrasquad games. The pattern of success that haunted me as a teenager reared its ugly head when the fans, cameras, and other teams showed up. I’d have great outings, then I’d have outings where I couldn’t throw a strike and even threw some wild pitches. Eventually, I became undependable. Every time I felt the Head Coach was about to look to the bullpen for relief in a game, I was skittish and sometimes even tried to make myself less noticeable. After one last struggled outing, my name ceased to be called. My pitching coach told me “You’re like Dr. Jekyll and Mr. Hyde, man. We never know which Gary we’re going to get when you step on the mound.” Frustrated with the results of my season after having high hopes that my “mental block” was in the past, I declined my collegiate summer ball opportunity to train rigorously on my own.

I ended up with three simultaneous injuries from over-training that summer. Remembering the number of recruits coming in next season and that I’d likely not be 100% healthy in time for the season, I decided to hang my cleats up. I’ve always told people that my injuries ended my career, but had I had more success I would’ve returned. I was exhausted from the intense fear of throwing a 5 ounce baseball 60 feet, 6 inches in an organized baseball game. I had even got to the point where I was scared to play catch and began throwing balls wild even while just warming up.

After my baseball career ended, I fell back into waves of depression. Sleepless nights, no energy, little appetite, and a feeling of hopelessness haunted me regularly. Meditation and exercise helped, but never conquered it. I did not open up to anyone about what I was experiencing. I felt as if it were a weakness. Even when performing at the top of my class, nothing seemed to satisfy me. I am a pre-med student and still feel the effects of performance anxiety on the difficult tests I take. I perform lower because of this.

Realizing the impact this had on my life, I finally sought help. After evaluation, I was diagnosed with ADHD and Major Depressive Disorder as well as abnormally elevated levels of anxiety. My entire life seemed clear now. Simply knowing the source of my issues felt like I had been re-awakened. I’m now in therapy as well as being prescribed Adderall for my ADHD. I declined the offer of an SSRI for depression at this time, as my therapist told me my depression could be a symptom of the ADHD.

I told my therapist everything I had experienced in baseball and outside of baseball. It was like she was by my side the entire time, predicting the outcome of events in my stories. She assured me this had most likely been the underlying problem. After seeking treatment, my life is changed. It was incredibly frustrating that I did not seek help earlier, but I’m relieved I found out later than never. I’ve realized brains that are wired for ADHD, depression, and anxiety do not have to inhibit your potential in anything. People like us are unique and even have some benefits that others do not. It is not a weakness. I am a more insightful, self-aware, and empathetic person because of my experiences. I coach teenagers now and am able to recognize behavior and relate to these players.

My advice to anyone who might be having similar experiences would be to openly communicate with people you trust. If you do not recognize what might be happening, someone else likely will. The sooner you take action to control your thoughts, the sooner you are able to “be the change” in your own life as well as other lives. I might not be on a college baseball team anymore, but we are all a team in this battle together.